Mecklenburg-Western Pomerania  is one of the most popular tourist destinations in Germany and famous for its diverse lake landscape with its high species diversity. The ecological value of the lakes would be even higher if the wide system of rivers, brooks and water-ditches and their links were intact. Unfortunately, almost every sixth stream in MV is piped, which is equal to destruction; the water quality is poor and migratory species encounter a barrier here. Manfred-Hermsen-Stiftung helps to plan and to finance the restoration of ecologically poor but important segments of former brooks and water-ditches. The main burden is shouldered in each case by the state that is endeavouring to implement the EU Water Framework Directive. In most cases, children and young people are involved and accompany the work in planning and practical ways.

The small brook Tessenower Graben is located in the Nature Park “Mecklenburgische Schweiz and Kummerower See” and is a typical example of land clearance in former Eastern Germany (GDR). The brook was partly covered and canalized into subterranean pipes to give way to the creation of large uninterrupted fields above. From an ecological point of view, this is one the worst forms of ecosystem degradation and therefore needs to be reversed by law (EU Water Framework Directive and related national laws for implementation).

Manfred-Hermsen-Stiftung restored 4 kilometres of the brook to natural conditions, in cooperation with the administration of the nature park, the Water and Soil Association Teterower Peene and local farmers. Financial support came from StAUN (State Agency for Environmental Protection and Nature Conservation of Mecklenburg-Vorpommern) in Rostock, which took over 2/3 of the restoration costs. The project was implemented by the landscape planning agency Pulkenat in Gielow.

In 2004, a feasibility study was written and in 2005 the first restoration measures were taken, such as the removal of pipes, brook modelling and widening of narrow segments of the watercourse.

In cooperation with this project, a number of environmental training activities have been carried out in summer 2007. They concentrated around the third restoration segment, where the Tessenower Graben flows through a small spruce tree grove. Here the pipes and revision shafts had been removed and a class of Malchin Grammar School had been on an excursion to the brook to research the water; together with 12 adolescents, attendees of an international workcamp, the pupils helped to shape the new bed of the brook.

In 2008, the clear-cutted area was overgrown already and changed into a blooming meadow over the summer. Solitary trees like sycamore maples, willows and oaks disseminated and grew inbetween protected places. At the outlines of the clear-cutted area more spruce deviated in the winter. We found bark beetles in some of the stems.

In 2009 we were authorised to cut clear another 2 hectares of spruce under the terms of reforesting the whole area soon. Pupils of the “Malchiner Gymnasium” planned the recultivation, considering native deciduous trees and including some of the endangered species. Since then, activities with young people from all over the world have taken place during the summer as part of an international youth camp organised by NIG e.V. and the Nature Park Administration. 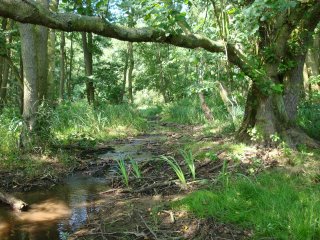 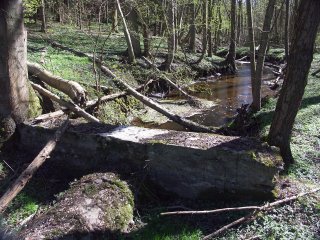 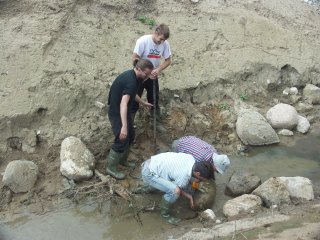 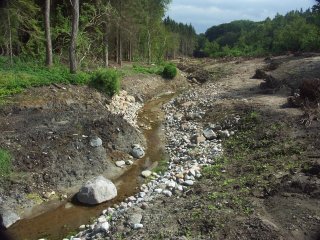 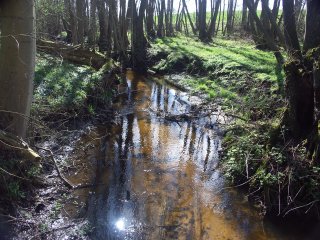 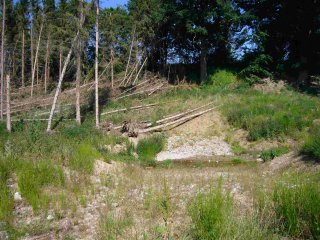 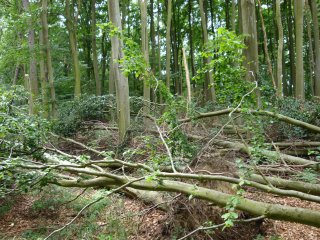 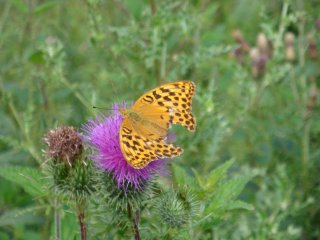 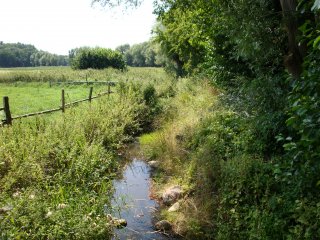