The Project „Coastal Wetland Río Limarí and Fray Jorge Biosphere Reserve” is a joint project of the Manfred-Hermsen-Stiftung and the Neotropical Center for Training in Wetlands (Centro Neotropical de Entrenamineto en Humedales, CNEH), with the aim of creating a Ramsar-Site for the coastal wetland of the Río Limarí. Alongside the implementation of a sustainable conservation strategy, we are pursuing awareness-raising and capacity building for the protection of nature in the region, and intend to enable potential follow-up projects.

Background
The project area is situated in the IV Coquimbo Region, approximately 320 km north of Santiago de Chile. With a dry-mediterranean semi-desert landscape, the region forms a transition between the mediterranean savannah of Central Chile and the Atacama Desert, the driest desert on earth. Out of thermal ocean and atmospheric currents arises coastal fog, the Camanchaca, which meets on its landward drift the Talinay coastal range, where it sustains the famous Fray Jorge coastal-fog temperate rainforest with water by condensation.

The coastal wetland Río Limarí and future Ramsar-Site has a surface area of about 800 ha, it borders to the south of the Fray Jorge National Park and lies in the expansion-zone of the Fray Jorge Biosphere Reserve. It encompasses the lower fluvial depression and the estuary of the Río Limarí. With a catchment area of approximately 12.000 km2, Río Limarí belongs to the biggest rivers of the Region, flowing from the Andes westwards through the semi-desert towards the Pacific. The wetland is one of the biggest and until today also the most intact coastal wetland of the region. It contains a high number of rare endemic plant and animal species and is regularly frequented by various migratory birds. This region belongs to one of the world’s 34 Biodiversity-Hotspots (Central-Chile and Valdivian Rainforest; Mittermeier et al 2005, Myers et al 2000).

The Fray Jorge National Park has been established in 1941 and has a total surface area of 9,959 ha. The coastal-fog temperate rain forest covers about 4%, the remaining areas are habitat-typical dominated by cacti and xeric shrubs. Due to the uniqueness of the coastal-fog temperate rainforest and because of the interest in future scientific projects, the National Park has also been declared a Biosphere Reserve in 1977, but only consisted of a core area. The Fray Jorge Biosphere is now in the process of being expanded by incorporation of a buffer and development zone.

The biodiversity in this area, compared to surrounding region, is exceptionally high. In the National Park alone there have been 440 native plant species documented. Amongst them are 260 endemic, 86 vulnerable, and 10 endangered (Red book of Coquimbo, 2001), as well as 227 animals, amongst them 123 birds, 74 arthropods, 23 mammals and 7 amphibians and reptiles (Jaksic u. Silva et al 2004).

The conservationist and Right Livelihood Award Laureat, Professor Dr. Michael Succow, accompanied us on a visit to the project region in March 2014. He considers the coastal wetlands of the region to be special sites of high ecological value. Also, in his opinion, these wetlands, which are highly threatened and partly already considerably damaged through the development of residential areas, infrastructure, and intensive agriculture, have to receive highest priority for conservation.

The continuous drought and the conversion of additional areas for agricultural use, (mainly wine yards, olive groves, and fruit cultivations) are exacerbating the growing conflicts related to water management in the region. The proportional water consumption is at approximately 75% agriculture, 15% mining, 8% industry, and 2% domestic use, whereby irrigation water is predominantly sourced from surface water, and the mining sectors consumes almost exclusively ground water. The surface water reservoirs are currently however nearly dried out, which implies that a growing proportion of irrigation water is now being covered by ground water. At wetlands fed by ground water, only minor alterations are currently observed, whereas the surface water fed wetlands, including Río Limarí, already have been affected to a notable extend. We assume that there might be also an impact of the ecosystem of
the brackish water zone, but this has yet not been investigated. 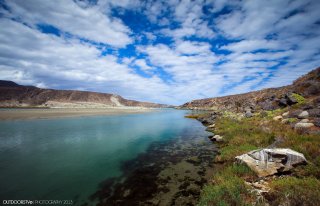 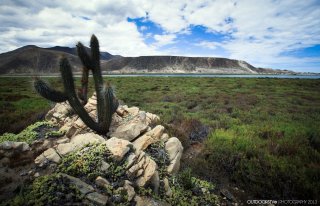 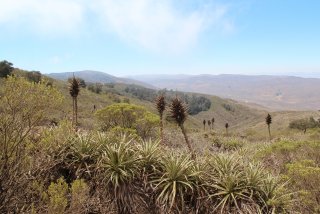