The peatlands of Eastern Europe measure about 280.000 square kilometres and belong to some of the biggest carbon stores next to the tropical rainforests of the Amazon and Indonesia and the Canadian tundra. Just the European part of Russia has 20 billion tons of carbon stored in the peat. Since 2008, the foundation Manfred-Hermsen-Stiftung  has been committed to rewetting projects in Belarus and Russia.

Just the European part of Russia has 20 billion tons of carbon stored in the peat. There is another 1.3 billion tons in neighbouring Belarus, and more important areas to store carbon are in the northern part of Ukraine. However, at the moment these peatlands are big emitters of CO2.

The European part of Russia comes in second after Indonesia in terms of releasing carbon dioxide out of its peatlands. Rewetting and sustainable management are immediately required if we want to reduce greenhouse gases and protect the climate.

Peatlands are also an important habitat for animal species, some of which are globally threatened, such as the golden eagle, rare butterflies and dragonflies. 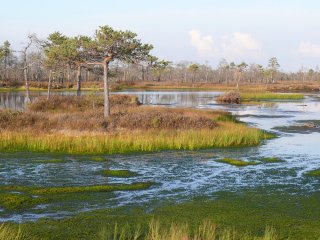 Peatlands serve environmental and nature conservation in many ways.

With the support of a study organized by the British nature conservation organization RSPB, Manfred-Hermsen-Stiftung not only contributed but provided vital and timely input to the initiative of the German government to finance large-scale rewetting projects in East European peatlands since 2008.

The study was an important prerequisite for the rapid implementation of several peatland restoration projects in Belarus and Ukraine. The German Government is now supporting large-scale rewetting projects in the two countries with a total of around 7 million euros. In Belarus alone, 10,000 hectares have been rewetted. In addition, further peatland conservation projects have been initiated.

Since 2009, the MHS has also regularly supported rewetting projects of BirdsRussia in Russia, mostly in the region around Moscow, where more than 200 ha have been rewetted in the Taldom region together with BirdsRussia and NABU. In the neighbouring region of Schatura, too, almost 100 ha have been rewetted. Further projects have been started in the region of Vologda and Nizhny Novgorod. In 2018 and 2019, with the help of the MHS and NABU, initial plans were also introduced for important rewetting projects in the West Siberian Wasjugan Moor, the largest peatland in the world.

The foundation supports a new rewetting project together with the Zoological Society of Frankfurt (ZGF) in the Beloveshskaya Pushcha National Park. The Action Plan of the National Park identifies the restoration of the hydrological regime as one of the most urgent priority activities.